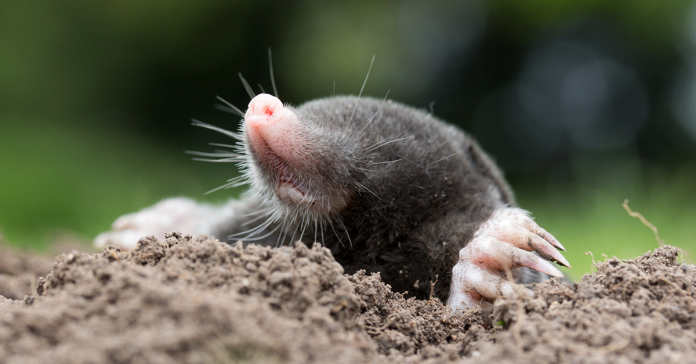 Everyone has seen those mounds of earth dotted around their garden, but how many of us have actually seen the elusive creature that creates them? The mole is a fascinating creature that often gets a bad reputation from gardeners across Britain.

Recognizable from its short, velvety grey-black fur, long pink snout, and shovel-like front paws, the European or common mole is a fascinating part of British wildlife. How many of these fun facts do you know?

There are no moles in Ireland

Despite the fact there are an estimated 41,400,000 moles spread across Britain, there are no moles in Ireland or Northern Ireland. The reason why dates back to the ice age – the colder weather caused the moles to move up north from where they were in Europe.

Moles successfully managed to get into Britain, but sea levels rose too high for them to make the move over to Ireland, leaving the island without this fascinating mammal.

A rare sight above ground

Moles spend most of their time beneath the surface, tunnelling around in search of food to eat. It’s very rare that you’ll actually see one out and about above ground, and even if you do spot one making its infamous molehills, you’re only likely to see its snout before it burrows beneath the ground again.

Because of this, they’ve had to adapt to a lack of oxygen – below ground, there’s around a third of the oxygen that we find above ground. Moles have more blood in their system to cope with this, as well as twice as much haemoglobin as other mammals their size, which carries more oxygen through their bloodstream.

Moles are mostly solitary creatures. They live in their own tunnelling network, with males only broadening their territories in search of females. Moles will then create a spherical area lined with nesting materials where the female moles give birth to a litter of up to 5 baby moles. They mature fairly quickly, being weaned at 4-5 weeks and then leaving the nest and dispersing to their own territories within 5-6 weeks.

The only mole thought to live in colonies is the star-nosed mole, which is found in North America. The European mole will stay in the confines of their own tunnel network, with special chambers kept especially for sleeping, birthing, and even storing food. Moles have been known to stay in their network of tunnels for generations, only leaving when the food disappears.

A mole needs to consume between 70-100% of its own body weight in order to survive. That’s what they spend most of their times doing below ground – foraging for food to eat. Their diet mainly consists of earthworms, but they also eat other insects such as beetles and larvae. Contrary to popular myths, they don’t eat plant roots.

They’re able to paralyse earthworms with a toxin in their saliva. Once they’ve bitten their prey, they’ll bring it back to a special storeroom in their tunnelling network to eat later. Some scientists have found food caches with up to 470 earthworms stored in them – sometimes more!

Blind as a mole

Differing from what you might think, moles aren’t actually blind. They have very small eyes, and do have poor vision, but they can still see somewhat. Moles are colourblind and rely on special hairs on their back as well as a fantastic memory of their extensive tunnel network to get around.

Their fur is also comfortable lying in either direction, so they can quickly move backwards or forwards through their tunnels.

Scourge of the gardener?

Moles are considered pests by keen gardeners and agriculturists, but they actually do a lot of good for the soil. By tunnelling around and moving through the earth, they’re actually aerating the soil, which is good for its overall health.

Moles also make short work of many underground pests such as cockchafer and carrot fly larvae, which cause havoc with agricultural crops.

Do you know any fascinating facts about moles? Let us know over on our Facebook page!