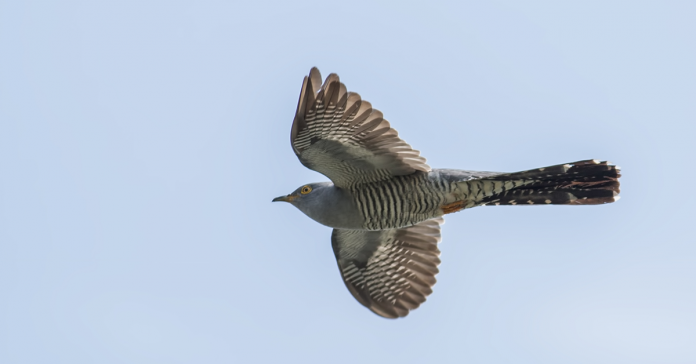 This fascinating parasitic bird was once thought to herald the start of spring with its distinctive ‘cuck-oo’ call, but species numbers have been declining over recent years – so much so that they are now listed as a red species.

There are actually three different breeds of European cuckoo, but only one of them visits us here in the UK – the common cuckoo. Cuckoos migrate over to Britain for the summer, typically making an appearance around April time. Their onomatopoeic name comes from their ‘cuck-oo’ call, which is only made by the males.

While cuckoos used to be a more familiar sight – or sound – around Britain, their numbers have gradually declined in recent years, with us losing more than half the population in the last year alone. There are currently around 15,000 breeding pairs in the UK.

Apart from their distinctive ‘cuck-oo’ call, you can recognise a cuckoo from its grey back and head, long pointed wings, long tail, and barred white underparts. They can sometimes be mistaken for sparrowhawks because of their similar markings and size – their long tails and pointed wings can appear hawk-like in flight.

While you’re more likely to hear one than see one in the wild, you might be lucky enough to spot one hiding as still as possible among the branches of trees, on the lookout for a potential host’s nest, or food. They tend to feed on insects, and have a particular fondness for hairy caterpillars.

Why are cuckoos a rarer sight in Britain today?

Did you know that we’ve only discovered in the past decade where cuckoos go for winter? Thanks to the efforts of the British Trust for Ornithology, we’re able to track cuckoos’ movements via satellite, discovering that they winter in the forests of the Congo.

The decrease of natural food sources and natural habitat has more than likely had an influence in declining cuckoo numbers, but it is thought the loss of numbers is more likely to be because of the arduous journey from their winter location over to Britain.

Cuckoos’ migration routes tend to vary, with most English cuckoos attempting to journey through Spain, and Scottish and Welsh cuckoos journeying through Italy. Due to increasing droughts in South Western Europe, English cuckoos find it hard to put on enough fat reserves to make their difficult journey, which correlates with the decline in numbers. It is thought that up to two-thirds of cuckoos that used to make it to Britain have now been lost.

The birds tend to migrate during the night, and remarkably attempt to cross the Sahara in a 50-60 hour continuous flight, flying day and night to reach the British coast.

What are their sneaky breeding tactics?

Cuckoos have a unique breeding habit when it comes to their young. Unlike most birds who tirelessly create a nest in which to house their young through the next few weeks once breeding season has started, the cuckoo outsources its parenting to other birds. Female birds will lie in wait, spying out a busy nest to host their offspring. When the parent birds’ backs are turned, the mother cuckoo dives in, removes one of their eggs, and replaces it with one of her own, before disappearing off into the trees. This entire exchange takes around 10 seconds.

Female cuckoos tend to stick to a favourite breed of birds to host her young – these will tend to be the same bird that reared her. Dunnocks, pied wagtails, and meadow pipits often fall prey to the cuckoo’s young, but reed warblers are a particular favourite.

As a result of this parasitic breeding tactic, host birds become very suspicious of any changes to the nest if they suspect a cuckoo has been lurking nearby. If they spot an egg that looks different to their own they will firmly reject it from the nest – however cuckoos have developed eggs over the years which will look similar to their chosen host’s nests, so the birds won’t always spot the difference. Cuckoos can lay anything up to 25 eggs all in different nests during a single summer before returning to Africa.

Chicks typically hatch after 11 days. They fledge after 20 days or so, but will continue to be fed by their host family for a few weeks afterwards. Once the cuckoo egg hatches, the chick won’t tolerate any other young in the nest. The young chick will work to push out any remaining eggs, and sometimes even the young chicks which might have hatched before it.

You would have thought that smaller birds like reed warblers and meadow pipits might spot something amiss when their single remaining chick turns out to be three times the size of them, but the cuckoo has many hidden tactics to fool its host family. The chick’s cries cleverly sound like a full nest of chicks and have been proven to make the host birds work even harder to try and feed the cuckoo as much food as they can.

As soon as the breeding season is over, adult cuckoos head straight back to Africa. Their young will follow once they’ve left the nest later in the summer – but they will never meet their parents.

Are there any fascinating facts about the cuckoo that you know, which you think we’ve missed off our list? Let us know all about it over on our Facebook page.

What is National Nest Box Week?