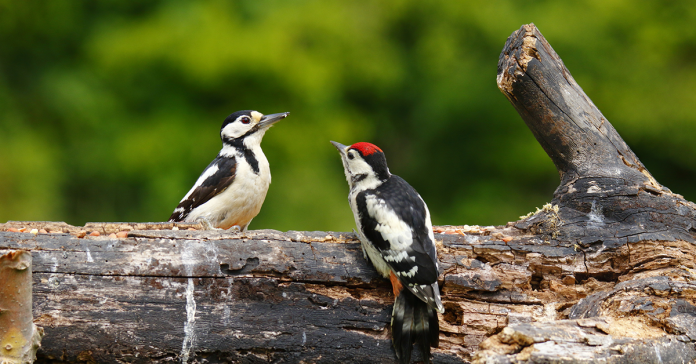 There are over 200 species of woodpeckers around the world, but only three of them live right here in the UK. These fascinating birds are recent visitors to gardens, having a particular fondness for peanuts and suet. We’ve put together a short guide on British woodpeckers so you can learn more about these interesting birds.

Want to know how to attract woodpeckers to your garden? Take a look at our blog post to see what you can do to make your garden a more appealing environment for these feathered friends.

This fellow is the largest of the woodpeckers you’ll find around Britain. Recognizable from its green plumage, red crown, paler belly, yellow rump, shorter tail, and long bill, it’s fairly easy to see where this intriguing bird gets its name. They have a black ‘moustache’, however it’s easy to tell the males apart from the females as this moustache is red, to match its crown. Green woodpeckers actually have a much weaker bill than the great spotted or lesser spotted woodpecker, so will only chisel at softer wood, and they very rarely drum to communicate.

The green woodpecker is a very antisocial bird. Though it does tend to pair for life, outside of the breeding season the two birds in a pair will roost separately, though this may be in the same general area. They make contact again during the next breeding season around March time; they re-establish their pair bond through a series of loud calls, and a period of courtship. Green woodpeckers are sometimes called the yaffle bird, named after their ‘yaffling’, or laughing call.

They like to spend most of their time feeding on the ground because of their diet, which mostly consists of ants. They will, however, supplement their diet with pine seeds and fruit during the winter time when ants are harder to find. While the green woodpecker is fairly evenly spread across Britain, they only started breeding in Scotland in 1951; similar to their other woodpecker cousins, there are none in Ireland.

Out of all the woodpeckers to spot around Britain, the great spotted woodpecker is the one you’re most likely to see pecking away at your feeders. It’s arguably the most common woodpecker, and loves to come and help itself to any peanuts and suet you have on offer in your garden.

Woodpeckers of course get their name from how they communicate, and how they make their nests. They have shock-absorbent tissue around the base of their bill and skull to cushion the impact from drumming. Drumming tends to start in early January, often by both sexes in an attempt to attract a mate, and will continue until around June. Nest holes are excavated by both the female and the male, and are sometimes used again the next season.

The great spotted woodpecker population has boomed in recent years. This is partly thought to be down to Dutch elm disease, which provided an abundance of feeding opportunities, and also because of how adaptable the species is. This particular woodpecker is happy at home in both deciduous and coniferous woodland, and can breed between sea level and up to 9,000 feet.

The lesser spotted woodpecker is mostly confined to the southern part of Britain, with none of them known to be in Scotland or the isles. This bird’s decline is fairly unexplained, but it is thought to be related to the booming population of its great spotted cousin, which has flourished in the past 30 years.

Similar to its cousins, the lesser spotted woodpecker is a hole nester, which it will excavate itself. They like to communicate through drumming, and will often use this as a method to mark their territory during the springtime. You can tell its drumming apart from the great spotted woodpecker by the duration; each roll tends to be twice as long as that of the bigger bird, and is higher pitched.

While the wryneck isn’t native to the British isles any more, you can spot them as an autumn visitor along the southern and eastern coast of England; they can occasionally be spotted during spring. Wrynecks used to be native breeders to the UK, until roughly the 1970s, with their decline starting as far back as the 19th century. It’s still a common breeder in Europe, and tends to winter in Africa – so much so that it can sometimes be called the cuckoo’s messenger.

Wrynecks are small, sparrow-sized birds, with a striking mottled plumage made up of brown hues, sometimes appearing greyish overall, with a contrasting dark band that runs down from the back of the head to the back. They’re closely related to their British woodpecker cousins, and just like other woodpeckers, they’re a hole-nesting species, often taking over holes that already in use by other birds. They will also make good use of nest boxes.

Similar to its cousins, ants are the favourite food, and wrynecks will use their long, sticky tongue to capture them. Wrynecks have a striking ability to turn their head and neck almost 360 degrees. They also hiss like snakes when startled, earning them the nickname snake bird. Wrynecks have shorter bills and normal tails in comparison to their woodpecker cousins.

How many of these woodpeckers have you spotted in your garden? Let us know over on our Facebook page!