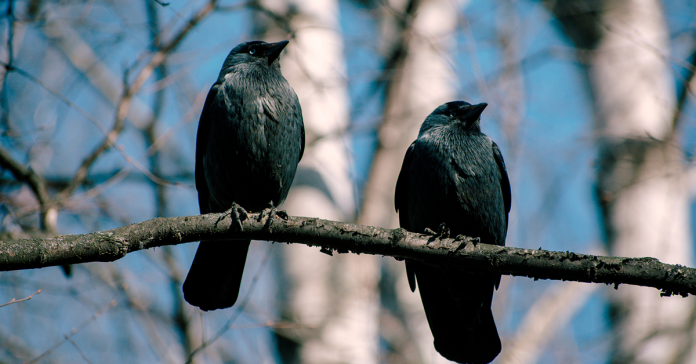 The birds belonging to the corvid family are arguably the smartest birds in the world. Some are easier to tell apart than others, with their own colourful differences, but how do you identify these fascinating birds and tell the majority of them apart from one another?

Perhaps one of the more common corvids, the carrion crow is the bird you are most likely to see while out and about, predominantly in England and Wales. They tend to be quite solitary in nature, although they can be found in pairs and will occasionally form flocks. They are very intelligent creatures. Carrion crows are recognisable by their all-black plumage and black beak; they are fairly large birds, with a wingspan of between 93-104cm.

Very closely related to its cousin the carrion crow, it’s only recently that the hooded crow has been recognised as its own species.  Recognised by its distinctive grey body, with black head and wings, the hooded crow can be found in the northwest of Scotland, the Scottish Islands, Ireland, and the Isle of Man.

This small, black corvid is recognisable by the grey sheen to the back of its neck, and by its striking pale blue eyes. In contrast to its cousin the carrion crow, jackdaws are quite sociable birds, and will nest in colonies – you can often spot them in mixed feeding flocks with rooks and starlings. Jackdaws are very common and widespread throughout the UK, apart from in the Scottish Highlands.

You can mostly tell ravens apart from other corvids like the carrion crow by its size. The raven is much larger, with a wingspan of between 120-150cm, and is the largest bird in the corvid family. They have all-black plumage, with thick necks with shaggy throat feathers, and a sturdy, thick, black bill. In flight, you can spot them by their diamond-shaped tail. Ravens gather in flocks, and can be found in more coastal and upland areas; it’s very unlikely to see one in urban surroundings. They are rarer than carrion crows or rooks, but are more common now than they used to be.

Rooks are notoriously gregarious birds, so you’re very unlikely to spot one on its own. Unlike the other all-black corvids, rooks are recognisable by their bare white/greyish skin at the base of their slender grey bill. Their wingspan is between 81-99cm. They breed in rookeries at the top of trees, which can often become noisy in spring when rooks go through their mating displays and argue over nesting sites. Being very sociable birds, they can often be seen with jackdaws. Rooks are widespread throughout Britain.

One of the more recognisable corvids from its striking black and white plumage, with glossy blue-black wings and a greenish tail, the magpie is steeped in superstition. They eat a varied diet, and will often bury excess food to come back to later. Magpies have an eye for shiny things, which they also tend to bury. Non-breeding birds will gather in flocks; you can spot magpies pretty much across the whole of Britain, with the exception of the Highlands, and some areas in Scotland.

The rarest of the corvid family, choughs are found exclusively along the coastal areas of Ireland, Wales, and in more recent years, Cornwall. With a wingspan of between 73-90cm, they are recognisable by their all-black plumage, curved red bill, and red legs. They fly in small flocks, and are particularly acrobatic during the nesting season in spring, diving and swooping, and even flying upside down.

Despite being the most recognisable of the corvid family, jays are actually very shy birds, so are rare to spot in the open. You’re more likely to see them in autumn, when they become a little braver in their search for acorns. Their diet consists mostly of acorns, which they often bury to collect later on. However you may spot them on an early morning near your peanut feeders. You can find them across most of Britain, predominantly in woodland, except for northern Scotland. Jays are recognisable by their pinkish-brown body, streaked crown, blue feathers on their wings, black tail, and white rump.

How many of these fascinating birds have you spotted around the UK? Let us know over on our Facebook page.

The Soothing Power of Birds – Q&A with Bird Therapy

HELPING WILDLIFE IN A HEATWAVE