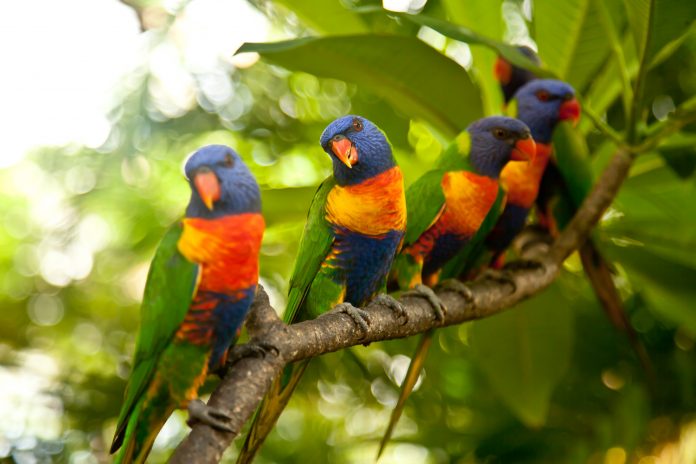 Who doesn’t love a bird with beautiful bright plumage? There are so many wonderful birds scattered across the globe that we never get to see here in the UK. We’ve taken a look at some of our favourite unusual and quirky birds from across the world for you to admire.

The common toucan is the largest bird in the toucan family. Known for its distinctive bright bill and striking black plumage, the toucan regulates its body temperature by adjusting the blood flow to its beak. Toucans are native to South America.

Flamingos are known for their beautiful pink plumage. They get their distinctive red and pink colouring as a result of their diet, featuring mostly shrimp, algae, and crustaceans.

The superb fairy-wren is native to Australia. The male is recognised by its bright blue plumage, and the females are brown in colour with a striking blue tail. Males will pluck yellow petals to present to prospective female partners.

As with many bird species, the male is the more ornately decorated in the peafowl family. The peacock is distinguished by its remarkable blue and green plumage, and that striking tail display. Peacocks will shake their tail feathers, causing a low-frequency sound, to attract females.

Perhaps one of the more unusual birds on our list, the potoo bird can be found in Central and South America. This nocturnal bird has a remarkably expressive face, most notably from its unusual eyes. They are strictly nocturnal birds and have a distinctive loud call.

These beautiful blue birds get their name from the famous nonsense poet Edward Lear. Native to Brazil, they are recognisable from their blue feathers and the yellow skin around their eyes and beak. Lear’s macaws are elusive in the wild, and were only accepted as a distinct species in 1978.

This striking bird earns its name from the distinctive straw-yellow crown on its head. The African crowned crane are the only cranes to roost in trees, making them unusual to other birds in the same species. They tend to be found in sub-Saharan Africa and South Africa.

These gorgeous birds are named for the male’s brilliant red plumage. The European settlers who discovered them were reminded of the rich red garb that was worn by catholic Cardinals. Northern cardinals are another wonderful example of a dimorphous bird, where the males and females sport different plumage.

This beautiful bird is one of the more popular pheasant species which are native to the mountainous forests of Central and Western China. The males are decorated with a bright golden head, red-tipped crest, cinnamon ruff, and a vivid scarlet breast.

One of the more colourful birds on our list, the rainbow lorikeet can be found in Australia, Indonesia, and Tasmania. While most parrots eat nuts, the rainbow lorikeet also likes to eat pollen and nectar. Its tongue is covered in papilla – special little hairs – to help it dig out its food from flowers.

Did you know that blue jays aren’t actually blue? Where as the flamingo and Northern cardinal get their distinctive colours from the pigments in their feathers, the blue of a blue jay is actually just a trick of the light.

One of Britain’s most distinctive birds is the gorgeous kingfisher. They tend to fly rapidly, while close to the water’s surface, to hunt fish. Kingfishers are widespread across Britain, and are increasing their range in Scotland.

Are there any unusual birds of the world you think we’ve missed off our list? Let us know over on our Facebook page!