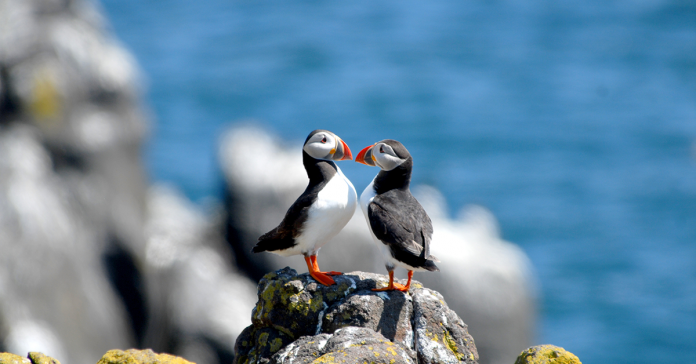 The vast array of coastal birds around Britain are fascinating to watch. While many of us may not be able to make it to the beaches to spot any just yet, we’ve put together a list of some of the most interesting British coastal birds. How many of these have you seen?

The Manx shearwater is a summer breeder, visiting the British coast between the months of February and October. They can’t walk well on land, so spend most of their time at sea, and can travel up to 300km to feed.

You can spot them elegantly skimming the waves; they like to congregate on the water below their breeding ground, only coming ashore after dark. Both males and females have the same plumage of black upperparts, white underparts, black wing tips and trailing edges of wings.

This fascinating bird is recognisable by its black head, upper breast and underparts, its white underparts, and the striking orange bill. The end of its bill has a strong chisel shape to help the oystercatcher open tightly shut bivalves such as muscles and cockles.

During the summer, an oystercatcher may need to scour an estuary to find food for a brood of up to six chicks. They can usually be seen among estuaries and along seashores, working its way along the water’s edge searching for shellfish and worms.

This native coastal bird was missing from British shores for over a century due to drainage and habitat issues, but returned to East Anglia in 1947. Thanks to hard work by the RSPCA, the avocet has successfully re-established itself in Britain. You can spot it on a few estuaries and coastal lagoons around Britain, particularly in the east and south of the country.

The avocet tends to stoop forward as it feeds, using its long, slender upturned bill to hunt for shrimp and other creatures in the shallows. Avocets have a brilliant white plumage, with a contrasting black cap, back of the neck, wing patches, and upper body near the base of the wings. They have very long, bluish-grey legs.

The little tern is a summer visitor to the UK, arriving around April and leaving by September for the West African Coast. It is tiny compared to the other British terns. The little tern is recognisable by its black cap and white forehead, with a black stripe through the eye, sporting a pale grey back and wings, white rump and tail. Its yellow bill has a black tip.

They like to fish right above the waves, flitting about in a fast flight, diving for surface fish. They can also catch insects on the wing. Little terns have small breeding colonies, and like to nest on shingle ridges and sandy beaches

Arctic skua relentlessly chases terns, puffins, and kittiwakes to get them to bring up any fish they might have eaten. They will then catch the food mid-air; during the chase, they will turn and sprint hawk-like after the other birds. In contrast its normal flight is graceful and steady. When protecting its young and nest, it will attack anything that comes near, even humans.

They can have two forms of plumage; their light form has a blackish crown, dark upperparts, white underparts, and a dark breast band. Its dark form is blackish-brown all over, with slightly paler underparts. Arctic skua are a summer breeding visitor to the UK, particularly around northern Scotland and the islands, arriving in late April and leaving by October.

This active little bird is a winter migrant to the UK, with some non-breeding birds remaining during the summer months. They are constantly on the move, feeding at the edge of where the water breaks. They scurry forwards when the water retreats to pick up any tasty morsels, and retreat back up the beach as the waves return.

Sanderlings are recognisable by their winter plumage of pale grey back with faint dark markings, dark shoulder patch, pure white underparts, and black legs. Its summer plumage can vary with a light chestnut head, neck, and breast, and its back is chestnut-coloured and mottled with black.

Have we missed any of your favourite British coastal birds off our list? Let us know over on our Facebook page!

HELPING WILDLIFE IN A HEATWAVE

8 birds to look out for this autumn