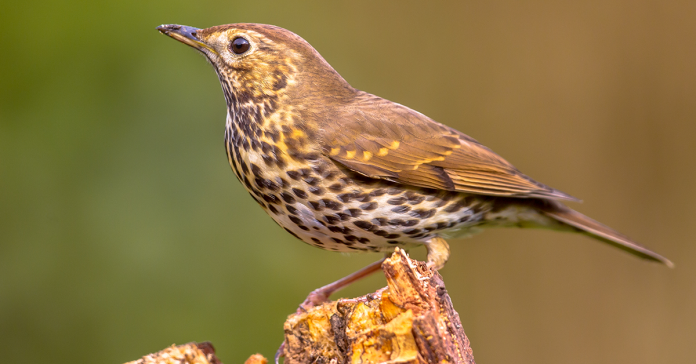 The family of thrushes consists of some truly fascinating birds, most recognisable from their spotted breasts. There are 4 native breeding species in Britain, with 2 migratory thrushes who visit during the winter. How much do you know about these British thrushes?

This striking bird earns its name from its love of singing; it can be distinguished from the singing blackbird by its use of repeated phrases. It is thought that the song thrush used to be more common than the blackbird, but its numbers have decreased in recent years. You can recognise a song thrush from its spotted breast, brown back, and buff underparts.

A stone ‘anvil’ surrounded by smashed snail shells is a telltale sign that a song thrush has been near. Song thrushes are one of the few birds to eat snails if other preferred food sources are scarce – they pick them up in their beak, and smash them on a rock or other hard surface to get to the fleshy innards. They prefer soft fruits and berries, and are more likely to be spotted in garden shrubbery than at your bird feeders.

The largest of the British thrushes, the mistle thrush can be recognised by its long wings, spotted breast, grey-brownish back, buff underparts, and pure white underwing. It earns its name from eating mistletoe berries – though here in the UK, holly and hawthorn berries are its preferred food of choice. It can be found year-round across Britain, but is very rarely found in the highest and barest of ground.

While it’s a fairly rare visitor to the bird table and tends to be quite nervous of humans, the mistle thrush can be very aggressive during the breeding season. It has been known to tackle sparrowhawks, barn owls, and buzzards if they come too close to their nests, and is a defender of food sources. The mistle thrush is also known as the ‘storm cock’, due to its habit of defending their territories from the tallest branches – even if there’s a fierce wind.

A winter visitor here in the UK, the fieldfare travels over from Scandinavia and sometimes even Russia to the warmer climate that Britain has to offer. It can sometimes be mistaken for its cousin the redwing, but you can recognise a fieldfare from its grey head and rump, rust coloured back, yellowish throat and spotted breast. Similar to the mistle thrush in size, shape, and behaviour, the fieldfare is a social bird, and can be found flocking together in open fields and parks. They even roost together on the ground, usually among bushes and shrubs!

The fieldfare can often be seen flocking together with redwings, but are larger than their cousins. Interestingly, a flock of fieldfares will all face the same way, whether they’re roosting or feeding on the ground. A small number have been known to breed here in the UK, but the vast majority of fieldfares are migratory birds. They tend to arrive around September, and then leave again by late April.

Perhaps the most common thrush to be found around Britain, the blackbird is aptly named for its pure black plumage. Recognisable from its striking yellow-orange beak and eye-ring, the blackbird is a prolific breeder, and very adaptable. It’s also a dimorphic bird, which means that the males and females are different colours. The females are brown rather than black; young blackbirds are also reddish-brown in colour with mottled breasts, meaning they can sometimes be mistaken for a song thrush or mistle thrush.

Unlike some of the other thrushes, the blackbird is an eager visitor to bird feeders and tables. The blackbird is one of the earliest members of the dawn chorus; they like to perch high in trees or on roof-tops to sing their fluting, melodious songs. They’re also known to enjoy singing after it’s been raining.

Similar to the fieldfare, redwings are a winter visitor to the UK, arriving from September and staying until March or April. There are a few breeding pairs known to stay in the UK though- mostly in the Scottish highlands – so the redwing can be seen throughout the year. Redwings are the smallest of the true thrushes, and are distinguished by the creamy-white stripe above their eyes, orange-red flank, and spotted breast. They can often be mistaken for fieldfares due to their social nature, and their tendency to flock with their cousin.

Redwings are rare visitors to gardens and feeders, instead preferring to roam the countryside fields and hedgerows searching for food. They can occasionally be spotted at feeders if snow covers the ground and other food sources are scarce.

A summer visitor to the UK, the ring ouzel makes its return to the Scottish uplands, north England, and north Wales to breed between March and September. Though it can sometimes be mistaken for its cousin the blackbird when seen from afar, the ring ouzel is recognizable by its striking white gorget – or crescent – above its breast. The ring ouzel has paler wing panels, black plumage, and is smaller and longer-tailed than a blackbird.

This fascinating bird prefers mountainous landscapes, and likes to nest on or close to the ground, generally in vegetation. While its population isn’t a concern globally, it has been decreasing in numbers here in Britain. It is thought that the ring ouzel population has declined by around 43% over the past 40 years, earning it the red conservation status.

How many of these British thrushes have you spotted in your garden or while out and about? Let us know over on our Facebook page!