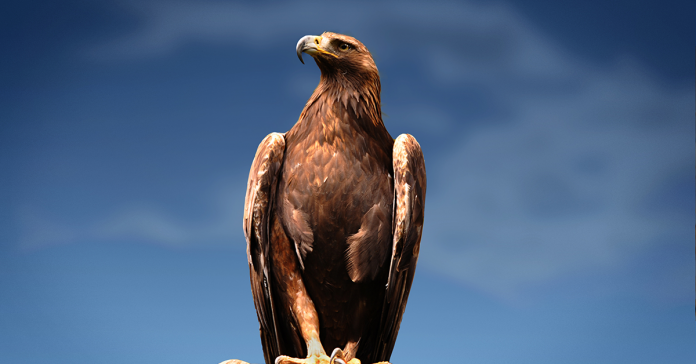 In recent news it was announced that the last wild golden eagle in Wales had unfortunately died. The bird had escaped captivity over 13 years ago, and had since been living wild in the mountains of mid Wales, becoming a wonderful attraction for bird watchers across the UK.

But what exactly is it about this bird that has fascinated so many people?

What is a golden eagle?

The golden eagle is a large bird of prey, with a massive wingspan of up to 7ft (2.2m). These fascinating raptors have longer wings and a longer tail than its cousin the white-tailed eagle. Adults are mainly dark brown with a golden head and neck; juvenile birds have white patches in their wings and at the base of their tail.

Golden eagles are a top predator in the Scottish countryside, feeding mostly on rabbits and mountain hares, though they do occasionally eat foxes and larger birds like grouse. They were even used to hunt and kill wolves in some Central Asian communities. This impressive bird is capable of lifting up to 11lbs!

They tend to have large home territories, with eyries built on rocky cliff faces or in trees. Golden eagles have an average lifespan of 23 years, and tend to pair for life.

There are eagles in Britain?

There are indeed! In fact, golden eagles used to be more widespread across the UK until around the 19th century. The last truly wild golden eagles died out in Wales and England due to human persecution, as farmers suspected them of hunting their livestock. The last breeding pair was found in Snowdonia – it has been roughly 150 years since golden eagles last bred in Wales, and in its absence its habitat and the way we use land has changed significantly.

Today, golden eagles can be found breeding successfully in Scotland. They can be spotted flying high above remote glens and upland areas in north and west Scotland. However, the golden eagle still faces some persecution in Scotland; it is estimated that between 30-40 birds are killed every year through poisoning or other means, which would explain why they’re not naturally colonizing southern Britain.

They also suffered from the use of pesticides in the 20th century, with some birds being made infertile, and eggshells thinning. The population in Scotland has somewhat recovered now that the use of certain pesticides has been banned. Golden eagles are currently an amber listed European species, and are a UK species of conservation concern.

The last wild golden eagle in Wales escaped captivity more than 10 years ago, and settled amongst the Cambrian mountain range in Powys. It is thought that not much effort was made to retrieve her, but she soon settled into the landscape and became a tourist attraction for many bird watchers. She was spotted by the Welsh nature observer and television presenter Iolo Williams as part of his documentary The Last Wilderness of Wales, and features in the last episode of his series.

While the last golden eagle in Wales has died, she was able to support herself in the Cambrian mountains. It is thought that this sets a positive precedent for any future plans to re-introduce the species to Wales. Williams noted that while this was a big loss for Wales, the bird was between 15 and 16 years old, and had been living in the wild for around 12 years – it was remarkable that she was able to survive so long in the wild after escaping captivity.

Plans to re-introduce the species

Golden eagles were re-introduced in Ireland, which has been a success. In 2018 the first successful rearing of a chick by an Irish-bred eagle was recorded – the first time an eagle had been bred in Ireland for more than 100 years! The success of the project in Ireland has inspired conservation efforts in the rest of the UK, and Wilder Britain have plans to re-introduce the golden eagle to the mountains of Wales.

The golden eagle won’t recolonize Wales naturally, so they would need to be introduced from elsewhere. Snowdonia has been chosen as a possible site for reintroduction, as the mountainous landscape is the preferred habitat for the birds. 10 birds would be introduced in total – 5 males and 5 females – which would be brought over from Scandinavia and central Europe. The project could go ahead as soon as summer 2021 if everything goes to plan and a license is approved. Each bird will be equipped with GPS tracking so that their nesting movements and feeding can be tracked.

Some farmers are worried that now eagles are no longer a part of the ecosystem and as their natural food source of mountain hares is scarce in Wales, that any eagles introduced will start preying on their lambs. However, Wilder Britain also has plans to reintroduce the mountain hare so as to provide a natural food source for the birds if they were to be re-introduced.

Were you lucky enough to see the last wild golden eagle in Wales? Or perhaps you’ve travelled to Scotland to spy them? Let us know all about it over on our Facebook page!