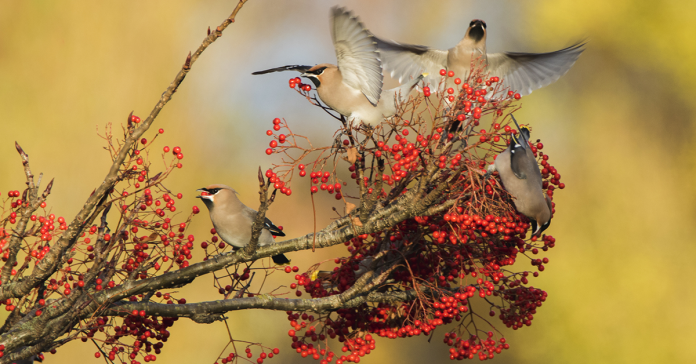 Autumn is a great time for birdwatchers. Several bird species migrate to the UK in time for winter, or pass through on their way to warmer climates. Curious to see what birds you’ll be able to spot in the countryside or in gardens this autumn? Take a look at this list of 8 birds and tick them off as you see them!

A cousin to the chaffinch, the brambling is a very sociable bird during the autumn and winter months once it has migrated to British shores. Bramblings are recognisable by their bright orange plumage, mottled head and back (which is usually black in the summer), white rump and belly, and red legs.

They are particularly fond of beech woodland and can be seen foraging in flocks numbering thousands. They will often gather with other finches; during autumn, you’re likely to spot them along east coast woodlands and fields. Bramblings tend to visit gardens during the colder winter weather when natural food sources are scarce; being ground feeding birds, they’ll flit about under feeders and bird tables eating the seeds that other birds have dropped.

A favourite winter visitor to the UK, the fieldfare can be spotted around the British countryside from October onwards. These large colourful thrushes are recognizable from their blue-grey head and rump, rusty brown back, speckled brown breast, and black tail.

Gregarious birds, the fieldfare can be found in large flocks, foraging for food in open fields and parks. They are also frequent visitors at bird tables if natural food sources are scarce; their favourite foods are insects, worms, and berries, but they will peck away at any fruit you’ve got laid on your bird table, or any seed mix you’ve got on offer.

This rare songbird comes with a brutal reputation. The great grey shrike is a very rare autumn and winter visitor here in the UK, with around 250 birds passing through our shores, and roughly 98 individual birds staying over the winter months. Appearing from September onwards, these are incredibly territorial birds, so you’ll be very unlikely to spot more than one at a time.

The great grey shrike is recognizable by its stout, slightly hooked bill, slate-grey back, white to light grey plumage, black mask, tail, and wings. It’s a similar size to a blackbird, and hunts mostly insects and small mammals, and occasionally other small birds. The great grey shrike will impale its food on thorns to help it get into the fleshy innards. Its Latin name – Lanius – means ‘butcher’, which is a very apt name for this bird. In Scotland, the shrike has earned the name White Whisky John, from its erratic ‘tipsy’ flight.

An illusive bird, the jack snipe is a winter visitor here in the UK which can be seen from September onwards – if you’re lucky to spot one! Often mistaken for the common snipe, the jack snipe is smaller than its British cousin, with a shorter bill. The plumage is very similar to the common snipe – the upperparts are brown with golden stripes, the breast is buff with thin dark streaks, and the belly is white.

The jack snipe has a habit of constantly bobbing while it feeds, as if its legs are on springs. It can be found in wetlands and marshlands, using its long bill to search mud for insects, worms, and sometimes even plant material. They can be quite hard to spot, and prefer to rely on their remarkably camouflaged plumage instead of flying from cover.

While there are some breeding pairs up in Scotland, the purple sandpiper is mostly a winter visitor here in the UK. They can be found along the rocky coastland from September onwards until around April and May, foraging through seaweed-covered boulders for small crabs, winkles, and other tasty morsels.

The purple sandpiper’s winter plumage is grey-brown, with a whitish breast. They had yellow legs, and a yellow-orange base to their bill, which is downcurved. The winter visitors that we see mostly come from Greenland and Scandinavia.

Another bird from the thrush family to keep an eye out for this autumn is the redwing. Often mistaken for its cousin above, the fieldfare, the redwing can be identified from its speckled breast, red flanks, brown back, and white eye stripe.

These fascinating birds love to snack on berries, and will strip a tree bare before moving on in search of more food. They may also frequent gardens and bird feeders during the winter if natural food sources are scarce and snow covers the ground – keep an eye out, and you might see one pottering around in your flower beds!

Perhaps one of the more unusual winter migrants to the UK, the water pipit can be found along the British coast and in river valleys. It is thought to be the only bird the migrates north, originating from the mountainous region of the Alps.

The water pipit can be recognised from its greyish-brown back, and pale plumage below, with streaks on its breast. It has a pale strip over its eye, dark legs, and a slender bill. The water pipit tends to feed on insects and larvae, mostly around the edges of puddles. They appear on our shores from late September, and leave around late March.

A rare winter visitor to Britain, the wonderful waxwing is another interesting bird to keep an eye out for this autumn. Appearing from October onwards, this striking bird tends to feed on berries – its particular favourites being hawthorn and rowan. Waxwings will typically eat between 800 to 1000 berries a day, which is roughly twice their body weight.

You can recognise the waxwing from its plump demeanour, prominent crest. Reddish-brown plumage with a black throat, small black mask, yellow-tipped tail, and the yellow and white in its wings.

How many of these fascinating migratory birds have you spotted across Britain? Which is the next bird you want to tick off your birdwatching list? Let us know over on our Facebook page!

8 of the UK’s Rarest Animals

How to care for birds in summer